Experience with the eActros so far strengthens aim of Mercedes-Benz Trucks: Start of series-production from 2021 onwards 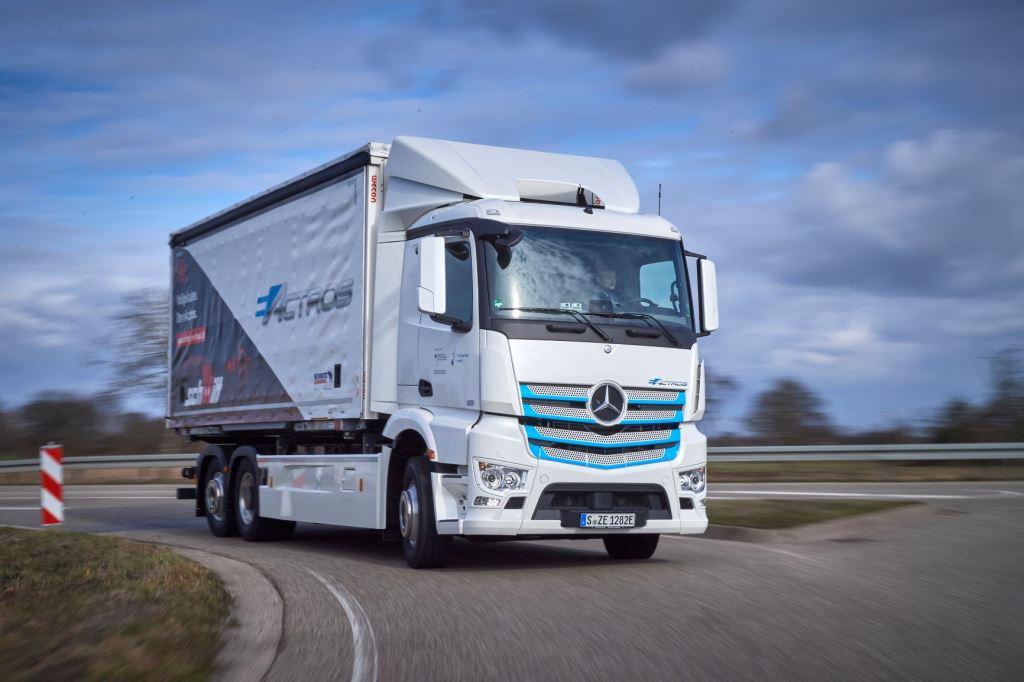 Fully electric heavy-duty distribution truck on the road near Rastatt:

The battery electric Mercedes-Benz eActros is in operation at logistics company Logistik Schmitt, located near Rastatt in southern Germany. Practical testing of the all-electric heavy-duty truck has been carried out in the region over the course of several years now and, as part of this, comparative drives with the eWayBW catenary project are also planned to take place in the Murg valley and surrounding areas. The official handover of the eActros to Logistik Schmitt took place at the beginning of the year as part of the Daimler Trucks annual press conference in Gaggenau.

The 25-tonne vehicle commutes between the warehouse facility of Logistik Schmitt in Ötigheim and Rastatt's Mercedes-Benz Gaggenau plant approximately seven kilometres away. Logistik Schmitt uses the eActros instead of a conventional diesel truck for the transportation of transmission housings. In doing so, the eActros with its range of up to 200 kilometres, covers a daily distance of approximately 168 kilometres as part of a demanding 3-shift operation.

As part of the eWayBW project, the transport of goods on the B462 near Rastatt will be partially electrified, whereby diesel-hybrid catenary trucks will be tested. In parallel to this, tests of the eActros will take place by way of comparison with the catenary project. As part of this testing, a further-developed version of the eActros with higher payload capacity and greater range will be used.

Using the further-developed version of the eActros, Logistik Schmitt will also deliver axle components along the 14 kilometres from the warehouse in Ötigheim to the Mercedes-Benz plant in Gaggenau – mainly via the B462. This route is, for the most part, the same as that used for the catenary truck project. The specifications of the eActros will be comparable with those of the catenary truck. This parallel testing of the eActros and the catenary trucks will take place for around one year and will deliver the most important data and findings necessary for comparing both concepts and its use cases.

30-09-2019
Sales of the updated series of GALICANIN autocrats with a load capacity of 25 tons with an boom length of 23.7 m started, which contain the highest cargo altitude characteristics and added unique…

27-09-2019
On September 19 and 20, 2019 in Nizhny Novgorod within the framework of the III International Forum of Rental and Construction Companies the results of the contest "All-Russian Rental Prize" were summed…

MICHELIN, CONTINENTAL AND SMAG CREATE A JOINT-VENTURE TO DEVELOP RUBBERWAY®