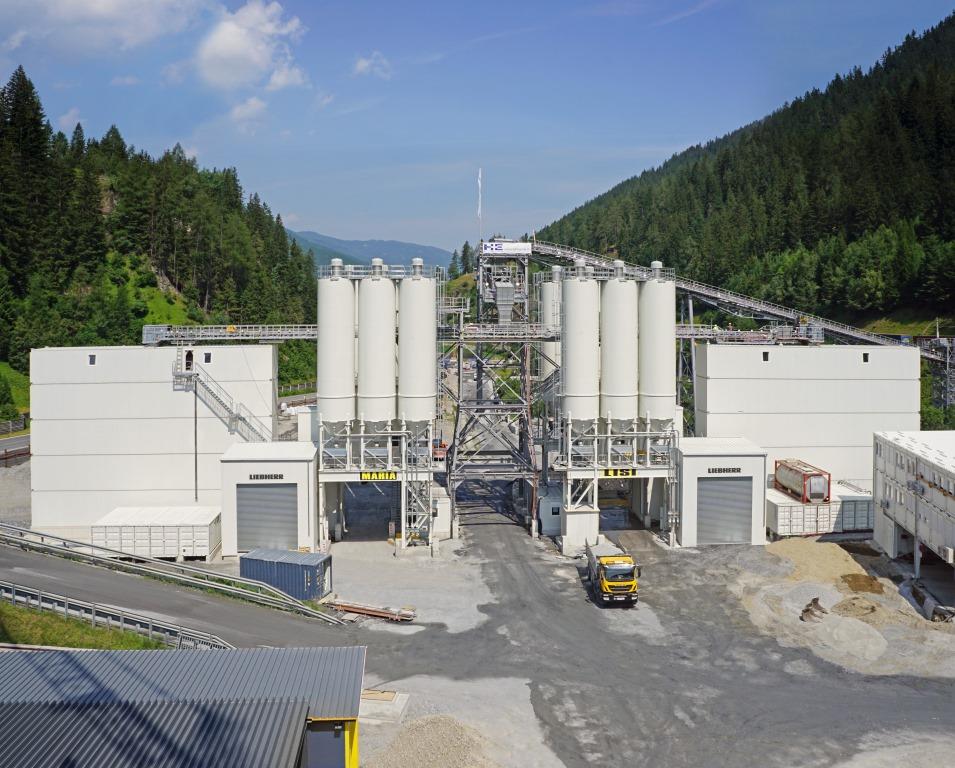 Two Liebherr Betomix 3.0 mixing plants produce concrete for the Brenner Base Tunnel major project. This is one of the most important infrastructure projects for Austria and the European Union.

Construction work on the Brenner Base Tunnel for a railway link between Austria and Italy has been underway since 2008. With a length of 64 km, it will be the longest underground railway link in the world. Construction should be completed by the end of 2027.

The excavated tunnel tubes are secured with plastic and steel fibre reinforced shotcrete. The exact concrete mix is adapted to the condition of the rock in the tunnel, which changes over its entire length.

The concrete supply has to be well organised: Large quantities must be delivered reliably in perfect formulations with mixed-in fibres into the pipes. The long transport route must be taken into account here. When planning the mixing plant, large rock storage volumes, reliable concrete output, fibre addition and dosing, limited space for positioning and assembly of the plants and 24-hour operation - even in winter - had to be taken into account. Another important criterion was logistics. For this purpose, special railway tracks were laid for the rail transport means for the concrete collection and for the material delivery of rock. The cement is delivered by truck in silo trains.

Porr chose two Liebherr-Betomix 3.0 plants for its concrete mixing plants. These come together with their two 3 m³ twin-shaft mixers to a maximum output of around 240 m³ compacted fresh concrete per hour. Thanks to the modular design of this plant concept, the Betomix plants could be optimally adapted to the local conditions. The large storage volume for aggregates with low space requirements was achieved by the new Liebherr high silos. Each of the two high silos can store 600 m³ of sand and gravel in seven chambers. Twelve binder silos, each with a capacity of 100 tonnes, supply the two plants with the required cement types. The fibre dosing systems are also part of the mixing plant, with the plastic and steel fibres being dosed separately, as the fibres have to be added in perfect doses during mixing and mixed in uniformly. For Porr, the decisive factors were the quality, the modular design and the short delivery time for Liebherr mixing plants.

21-02-2020
Ammann is now offering a sophisticated add-on compaction system that can be used with excavators. The firm says that its APA add-on compactors can be used in areas that would be difficult for other…

17-02-2020
The first ever tower crane with fibre rope for Poland: A 240 EC-B 10 Fibre has been dispatched and delivered to the Polish company Mazur Zurawie Sp. z o. o. Mazur and company representatives…